Friends of LASzip and LAZ, it has come to my attention (from more than one source) that a certain company East of LA has started to more aggressively promote their proprietary LiDAR format known as the “LAZ clone” (more here, here, here and here but also read the comments) by approaching individual stake holders of the LiDAR community. Trying to convince others to drop support of the open source LASzip compression for LiDAR management, server, and storage in favour of the proprietary “LAZ clone”, said company resorts – if needed – to bad-mouthing the LAZ format with made up arguments that attack the suitability of LASzip for “professional” use.

It appears the LiDAR lock-in PR campaign is now in full swing despite of my repeated attempts to reach out to said company for creating a joint LAS 1.4 compressor that avoids fragmenting the LiDAR data market. And I may just be hearing back about a tiny tip of the drink-the-koolaid iceberg PR. This seems to mark the start of the “clone wars” that we at rapidlasso tried to avoid … (-; 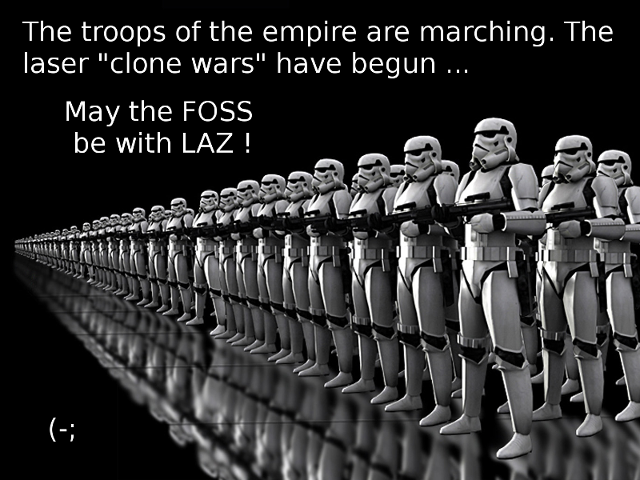 One way to engage the Empire is to draw them out from the darkness into full technical transparency. After all, the only argument for why the “LAZ clone” had to be created was that LAZ lacks a “particular feature” for efficient employment in the cloud, yet the question what this “particular feature” was has always been dodged (because we would have happily added it to LAZ).

How can you help?

You may comment below (also anonymously) or email us at ‘honestesri@rapidlasso.com‘ if you have any (juicy?) details about “LAZ clone” campaigns or on video or live training courses where it was “taught” to lock-up the LiDAR into zLAS during an initial “optimization” step …