Background:
The relief in the northwest coast of Baja California is subject to different processes. One process that has a major impact are landslides. The near-shore landslides have been a significant problem because this area coincides with the location of the Tijuana-Ensenada Scenic highway which is one of the main routes between Tijuana and Ensenada. On 28 December 2013 a rotational slip in the stretch of 93 km caused the closure of the Tijuana-Ensenada highway. Several measurements with emerging techniques such as photogrammetry by drones and terrestrial and airborne LiDAR surveys were taken since the landslide. From airborne LiDAR point clouds of different dates DTM are created and used to estimate differences (James, 2012). From terrestrial LiDAR point clouds the characteristics of planes and lines (i.e. striations) on the footwall are determined. An analysis of such geomorphological processes can facilitate a rapid response and help to reopen the highways faster. 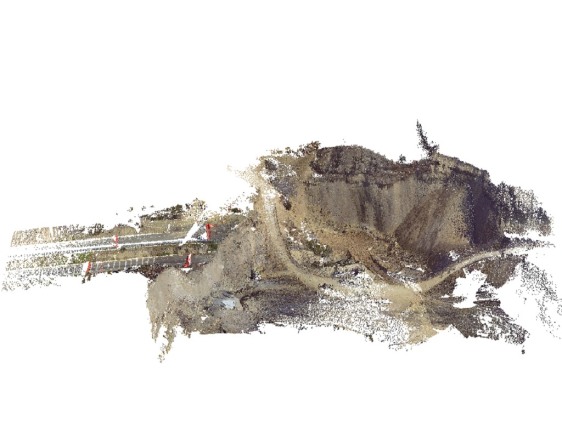 Goal:
The main goal of this project is to estimate the volume change on the landslide’s day and later years from digital terrain models (DTMs) of pre-event data (2006) and post-event (2013, 2014 and 2016). A second goal is to create a model of surface strain from TLS data and a point cloud (2013).

Data:
+ DTM of 2006 (pre-event) from the National Institute of Statistics and Geography (INEGI).
+ relief data of the day of landslide (2013) obtained by photogrammetry from 144 photos taken with a DJi S800 drone.
+ DTM from January 2014 aquired by satellite photogrammetry of images from GeoEye 1.
+ 11 TLS point clouds scanned and co-registered in February 2014  with a Faro Focus 3D x330.
+ NCALM aerial LiDAR captured In July 2014 of th landslide zone.
+ highway rehabilitation data taken in March 2016 from RGB / NIR photos of eBee drone flights.