The majority of LAStools users are processing airborne LiDAR. That should not surprise as airborne is by far the most common form of LiDAR in terms of square kilometers covered. The availability of LiDAR as “open data” is also pretty much restricted to airborne surveys, which are often tax-payer funded and then distributed freely to achieve maximum return of investment.

But folks are increasingly using our software to do some of the “heavy lifting” for mobile LiDAR, either mounted on a truck for scanning cities or on a train for capturing railroad infrastructure. The LiDAR collected for the cities of Budapest and Singapore, for example, was pre-processed by multi-core scripted LAStools when the scanning trucks returned with their daily trajectories worth of point clouds captured by a RIEGL VMX-450 mobile mapping system.

One customer who was recently scanning railroad infrastructure wanted to do automatic ground classification as a first step prior to further segmentation of the data. We were asked for advice because on such data the standard settings of lasground left too many patches of ground unclassified. Also the uniform tiling lastile generates by default is not a good way to break such data into manageable pieces given the drastically varying point densities in mobile scanning.

We obtained a 217 MB file in LAZ format with 40 million points corresponding to a 2.7 km stretch of railway track. We first run a quick lasindex (with the options for ‘mobile’) on the file that creates a spatial indexing LAX file with maximally 10 meter resolution. This not only allows faster area-of-interest queries but also gives us a more detailed preview than just the bounding box of where the LiDAR points actually are in the GUI of LAStools. 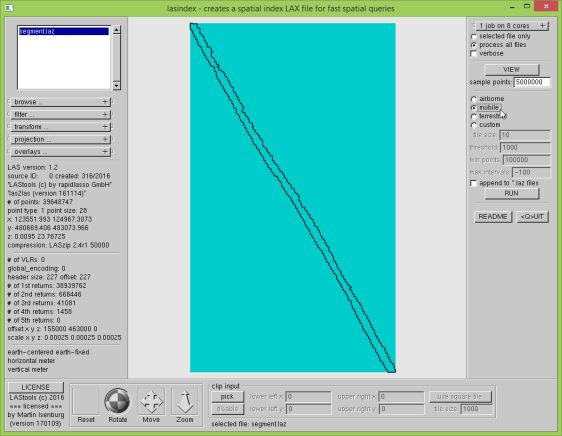 Presence of LAX files results in actual extend of LiDAR being shown in GUI.

We then run lastile four times to create an adaptive tiling in which no tile has more than 6 million points. The first call creates the initial 1000 by 1000 meter tiles. The following three calls refine all those tiles that still have more than 6 million points first into 500 by 500 meter, then 250 by 250 meter, and finally 125 by 125 meter tiles in parallel on 4 cores. Note the ‘-refine_tiling’ option is used in the first call to lastile and the ‘-refine_tiles’ option in all subsequent calls. 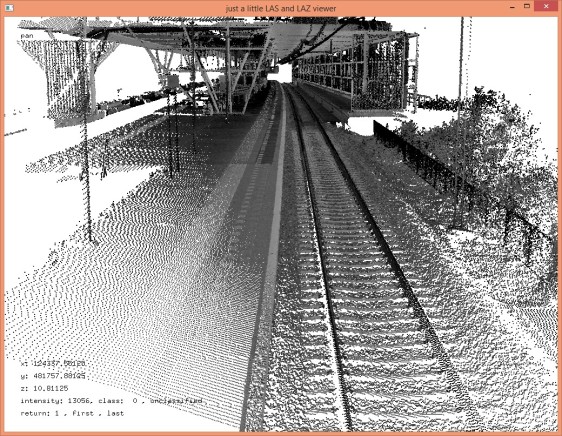 Adaptive tiling created with four calls to lastile. Scale factors of 0.00025 (see mouse cursor) implies that point coordinates are stored with quarter millimeter resolution. Lowering them to 0.001 would result in better compression and lower I/O.

Noise in the data – especially low noise – can lead lasground into choosing the wrong points during ground classification by latching on to those low noise points. We first classify the noise points into a different class (7) using lasnoise so we can later ignore them. These particular settings were found by experimenting on a few tiles with different values (see the README file) until visual inspection showed that most low points had been classified as noise. 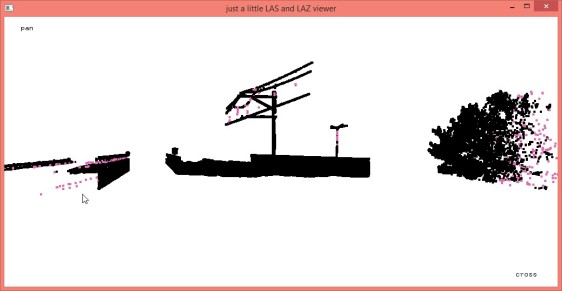 The points classified as noise will not be considered as ground points during the next step. For this it matters little that lamp posts, wires, or vegetation are wrongly marked as noise now. We can always undo their noise classification once the ground points were classified. Important is that those pointed to by the mouse cursor, which are below the desired ground, are excluded from consideration during the ground classification step. Here those low points are not actually noise but returns generated wherever the laser was able to “peek” through an opening to a lower surface.

For classification with lasground there are a number of options to play with  (see the README file) but the most important is the correct step size. It is terrain along the railway track bed that is supposed to get represented well. The usual step of 5 to 40 meter for lasground aim at the removal of vegetation and man-made structures from airborne LiDAR. They are not the right choice here. A step of 1 and the parameters shown above gives us the ground shown below.

The new ‘-flag_as_withheld’ option in lastile that flags each point in the buffer with the withheld flag is useful in case we want to remove all buffer points on-the-fly, for example, in order to create a DTM hillshade of 25 cm resolution for a visual quality check of the entire 2.7 km track using blast2dem from the BLAST extension of LAStools. 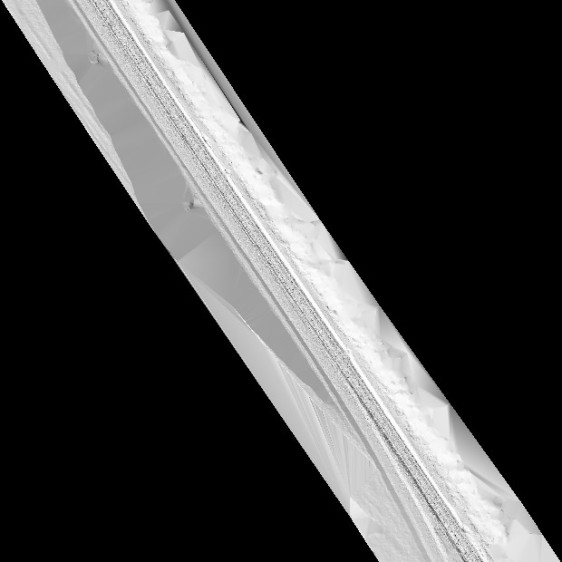