Background:
The Aosta Valley Region is a mountainous area in the heart of the Alps. This region is regularly affected by hazard natural phenomena connected with the terrain geomorphometry and the climate change: snow avalanche, rockfalls and landslide.
In July 2016 a research program, funded by the European Program for the Regional Development, aims to create a cloud dashboard for the monitoring, the control and the analysis of several parameters and data derived from advanced sensors: multiparametrical probes, aerial and oblique photogrammetry and laser scanning. This tool will help the territory management agencies to improve the risk mitigation and management system. 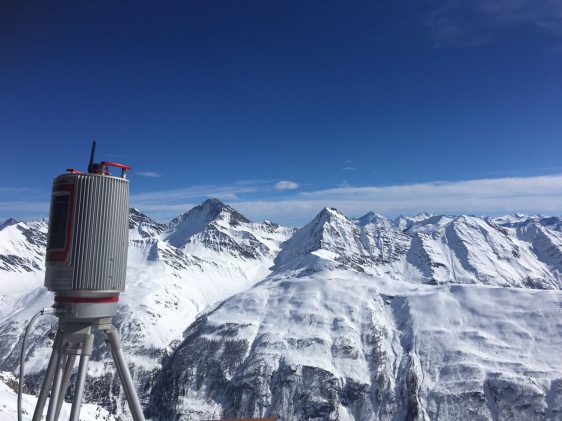 The RIEGL VZ-4000 scanning the Aosta Valley Region in Italy.

Goal:
This study aims to classify the point clouds derived from aerial imagery integrated with laser scanning data in order to generate accurate DTM, DSM and Digital Snow Models. The photogrammetry data set was acquired with a Nikon D810 camera from an helicopter survey. The aim of further analysis is to detect changes of natural dynamic phenomena that have occurred via volume analysis and mass balance evaluation.

Data:
+ The photogrammetry data set was acquired with an RGB camera (Nikon D810) with a focal length equivalent of 50 mm from a helicopter survey: 1060 JPG images
+ The laser scanner data set was acquired using a Terrestrial Laser Scanner (RIEGL VZ-4000) combined with a Leica GNSS device (GS25) to georeference the project. The TLS dataset was then used as base reference to properly align and georeference the photogrammetry point cloud.