Background:
Until the end of the 17th century, the vast boreal forests of the interior of northern Sweden were exclusively populated by the indigenous Sami. When settlers of Swedish and Finnish ethnicity started to move into the area, colonization was fast. Although there is still a prospering reindeer herding Sami culture in northern Sweden, the old Sami culture that dominated the boreal forest for centuries or even millenia is to a large extent forgotten.
Since each forest Sami family formerly had a number of seasonal settlements, the density of settlements must have been high. However, only very few remains are known today. In the field, old Sami settlements can be recognized through the presence of for example stone hearths, storage caches, pits for roasting pine bark, foundations of certain types of huts, reindeer pens, and fences. Researchers of the Forest History section of the Department of Forest Ecology and Management have long been surveying such remains on foot. This, however, is extremely time consuming and can only be done in limited areas. Also, the use of aerial photographs is usually difficult due to dense vegetation. Data from airborne laser scanning should be the best way to find remains of the old forest Sami culture. Previous research has shown the possibilities of using airborne laser scanning data for detecting cultural remains in the boreal forest (Jansson et al., 2009; Koivisto & Laulamaa, 2012; Risbøl et al., 2013), but no studies have aimed at detecting remains of the forest Sami culture. I want to test the possibilities of ALS in this respect. 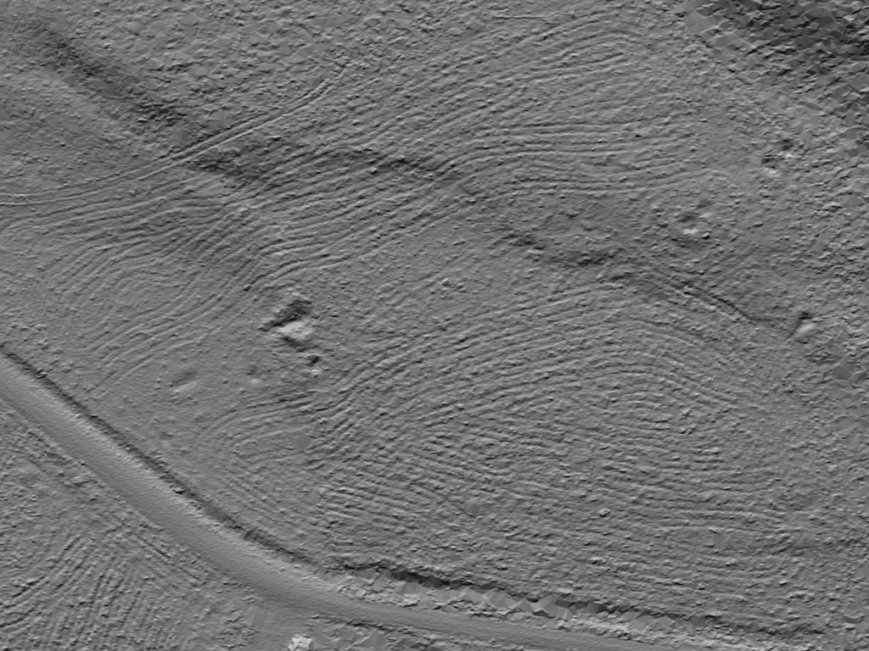 DTM from the Krycklan catchment, showing a row of hunting pits and (larger) a tar pit.

Goal:
The goal of my study is to test the potential of using LiDAR data for detecting cultural and archaeological remains on the ground in a forest area where Sami have been known to dwell during historical times. Since the whole of Sweden is currently being scanned by the National Land Survey, this data will be included. However, the average point density of the national data is only 0,5–1 pulses/m^2. Therefore, the study will be done in an established research area, the Krycklan catchment, where a denser scanning was performed in 2015. The Krycklan data set lacks ground point classification, so I will have to perform such a classification before I can proceed to the creation of a DTM. Having tested various kind of software, I have found that LAStools seems to be the most efficient way to do the job. This, in turn, has made me aware of the importance of choosing the right methods and parameters for doing a classification that is suitable for archaeological purposes.

Data:
The data was acquired with a multi-spectral airborne LiDAR sensor, the Optech Titan, and a Micro IRS IMU, operated on an aircraft flying at a height of about 1000 m and positioning was post-processed with the TerraPos software for higher accuracy.
+ The average pulse density is 20 pulse/m^2.
+ About 7 000 hectares were covered by the scanning. The data is stored in 489 tiles.

LAStools processing:
1) run a series of classifications of a few selected tiles with both lasground and lasground_new with various parameters [lasground and lasground_new]
2) test the outcomes by comparing it to known terrain to find out the optimal parameters for classifying this particular LiDAR point cloud for archaeological purposes.
3) extract the bare-earth of all tiles (using buffers!!!) with the best parameters [lasground or lasground_new]
4) create bare-earth terrain rasters (DTMs) and analyze the area [lasdem]
5) reclassify the airborne LiDAR data collected by the National Land Survey using various parameters to see whether it can become more suitable for revealing Sami cultural remains in a boreal forest landscape  [lasground or lasground_new]