Background:
The 850 km-long Alpine Fault (AF) is one of the world’s great laterally-slipping active faults (like California’s San Andreas Fault), which currently accommodates about 80% of the motion between the Australian and Pacific tectonic plates in the South Island of New Zealand (NZ). Well-dated sedimentary layers preserved in swamps and lakes adjacent to the AF currently provide one of the world’s most spatially and temporally complete record of large ground rupturing earthquakes (Howarth et al., 2018). Importantly these records reveal that major earthquakes occur with greater regularity on the AF than any other known fault, releasing a Magnitude (Mw) 7 to 8 earthquake on average every 249 ± 58 years and that the most recent earthquake was around Mw 8 in 1717 AD prior to European arrival. This computes to a conditional probability of 69% that the AF will rupture in the next 50 years. For a country that has recently had several notable earthquakes (e.g. 2010 Mw 7.1 Canterbury, 2016 Mw 7.8 Kaikoura) and has an economy heavily reliant on tourism, the next AF earthquake is the one NZ is trying to prepare for (note that a Mw 8 earthquake is about thirty times the energy release of a Mw 7).

The more data we can gather as scientists to constrain (1) the magnitude of the next AF earthquake, (2) the amount of lateral and vertical slip (offset roads, powerlines, etc.), (3) the coseismic effects (ground shaking, landslides, liquefaction), and (4) the duration it takes the landscape to recover (muddy rivers, increased sediment supply, prolonged landsliding), the more we can anticipate expected hazards and foster societal resilience.

Despite its name, the AF is almost completely obscured beneath a dense temperate rain-forest canopy, which has hindered fine-scale geomorphic studies. Relatively low quality airborne LiDAR (2 m-resolution bare-earth model) was first collected in 2010 for a 32 km-length of the central AF. Despite being the best studied portion of the AF, 82 % of the fault traces identified in the LiDAR were previously unmapped (Barth et al., 2012). The LiDAR reveals the width and style of ground deformation. Interpretation of the bare-earth landscape in combination with on the ground sampling, allows single earthquake displacements, uplift rates, recurrence of landslides, and post-earthquake sedimentation rates to be quantified. A new 2019 airborne LiDAR dataset collected along 230 km-length of the southern AF has great potential to improve our understanding of this relatively “well-behaved” fault system, what to expect from its next earthquake, and to give us insight into considerably more complex fault systems like the San Andreas. 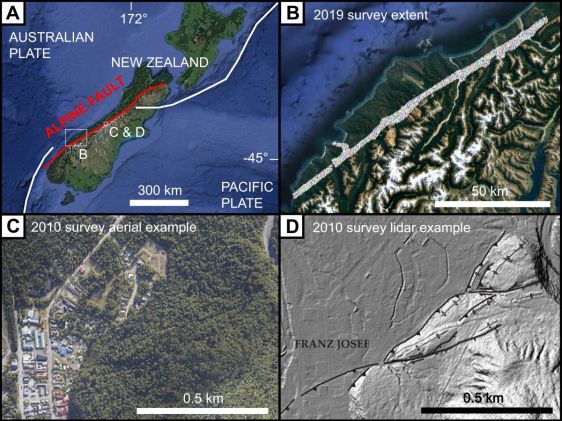 (A) Aerial view of the South Island of New Zealand highlighting the boundary between the Pacific and Australian plates (white) and the Alpine Fault in particular (red). (B) View showing the extent of the 2019 airborne LiDAR survey to be processed by this lasmoons proposal. (C) Aerial imagery over Franz Josef, site of a 2010 airborne LiDAR survey. (D) 2010 Franz Josef LiDAR DTM hillshade (GNS Science). LiDAR has revolutionized our ability to map fault offsets and other earthquake ground deformation beneath this dense temperate rainforest.

Goal:
The LAStools software will be used to check the quality of the data (reclassing ground points and removing any low ground classed outliers if needed) and create a seamless digital terrain model (DTM) from the 1695 tiled LAS files provided. The DTM will be used to create derivative products including contours, slope map, aspect map, single direction B&W hillshades, multi-directional hillshades, and slope-colored hillshades to interpret the fault and landslide related landscape features hidden beneath the dense temperate rain-forest. The results will be used as seed data to seek national-level science funding to field verify interpretations and collect samples to determine ages of features (geochronology). The ultimate goal is to improve our understanding of the Alpine Fault prior to its next major earthquake and to communicate those findings effectively through publications in open access peer-reviewed journal articles and meetings with NZ regional councils.