At the Asian Conference on Remote Sensing 2015 (ACRS 2015) held in Manila, rapidlasso GmbH was honored with the “Green Asia Award” by the Chinese Society of Photogrammetry and Remote Sensing (CSPRS). This award is given to a paper that directs Asia towards a greener future using remote sensing technology. This year’s award commends rapidlasso GmbH on advancing the area of LiDAR processing through their PulseWaves effort. PulseWaves is a vendor-neutral full waveform LiDAR data exchange format and API that simplifies access to full waveform data and allows researchers to focus on algorithms and share results. In the future this technology may prove valuable to improve biomass estimates for carbon credit programs such as the TREEMAPS project of WWF. 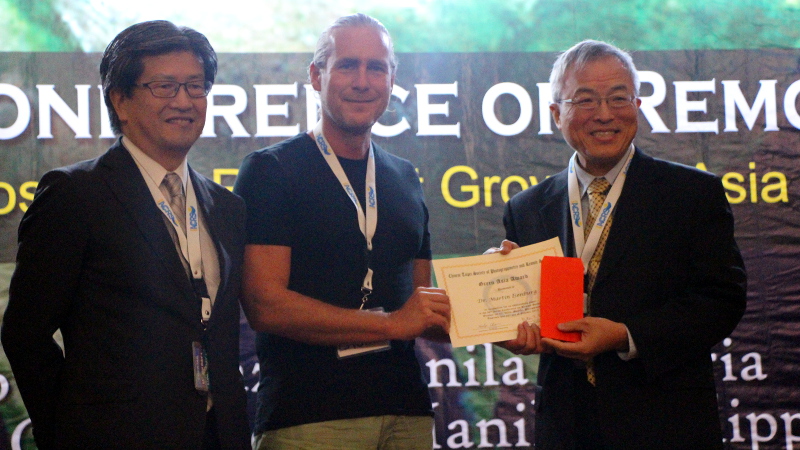 The society communicated to Dr. Martin Isenburg, CEO of rapidlasso GmbH, that this award was also meant to honor his many years of teaching and capacity building across the Asian region. Since the beginning of 2013 rapidlasso GmbH has conducted well over 50 seminars, training events, and hands-on workshops at universities, research institutes, and government agencies in Thailand, Malaysia, Myanmar, Vietnam, Indonesia, Singapore, Taiwan, Japan, and the Philippines. The on-going LiDAR teaching efforts of rapidlasso GmbH in Asia and elsewhere can be followed via their event page.

Green Asia Award given to the CEO of rapidlasso GmbH

The award certificate that was presented to Dr. Martin Isenburg by Prof Kohei Cho and Prof Peter Shih during the closing ceremony of ACRS 2015 came with a cash reward of USD 300. The award money was donated to the ISPRS summer school that followed the ACRS conference to top off the pre-existing “green sponsorship” by rapidlasso GmbH that was already supporting a “green catering” of summer school lunches and dinners to avoid single-use cups, plastic cutlery and styrofoam containers. The additional award money was used for hosting the main summer school dinner at a sustainable family-run restaurant serving “happy chickens” and “happy pigs” raised organically on a local farm. 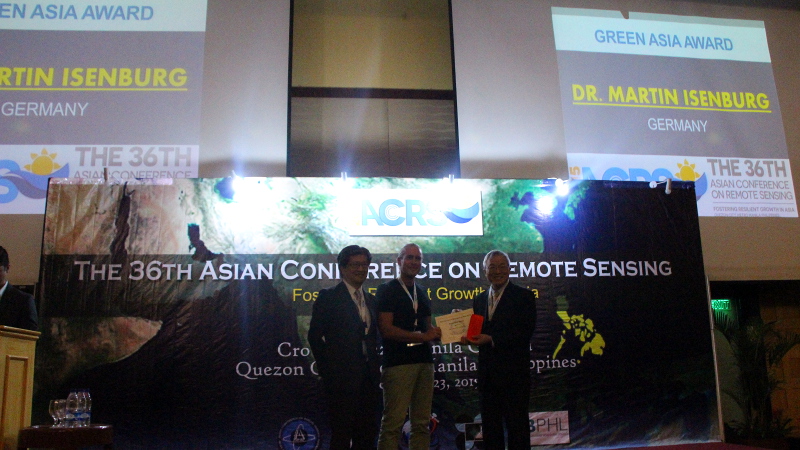 The week after Easter is poised to see Latin America’s premier LiDAR event of 2015 when LAStools, CloudCompare, and OpenTopography converge for the 3 day NPAC 2015 workshop in CICESE in Mexico. Just across the US border (one hour South of Tijuana) lies the coastal town of Ensenada in Baja California where Dr. Alejandro Hinojosa has done magic to bring together (for the first time) a dynamic group of well-known LiDAR enthusiasts.

The action-packed event runs from April 8th to 10th and includes a full-day course on LiDAR with LAStools by Dr. Martin Isenburg of rapidlasso GmbH, a full-day tutorial on processing point clouds with CloudCompare by its creator Dr. Daniel Girardeau-Montaut, and a day of exciting talks on data portals, landslide detection, commerical drones, structure from motion, and much more. The NPAC 2015 workshop is open to all and registration is free thanks to sponsorship by CONACyT and CICESE. The main language of the workshop will be English.

Scanning forests with LiDAR is done to predict timber yield, estimate biomass, and monitor ecosystems. A detailed Digital Terrain Model (DTM) is needed to accurately compute forestry metrics such as tree height. For generating a DTM it is important to have enough “ground returns” that measure the elevation of the bare-earth for which the laser pulse needs to penetrate through the vegetation down to the forest floor and reflect back to the plane. This can be difficult in a dense tropical forest with tall trees and many layers of canopy as the light of the laser pulse has many opportunities to be reflected or absorbed before reaching the ground. Often none of the light energy will reach the forest floor or the returning ground echo will be too weak to be registered back at the plane. 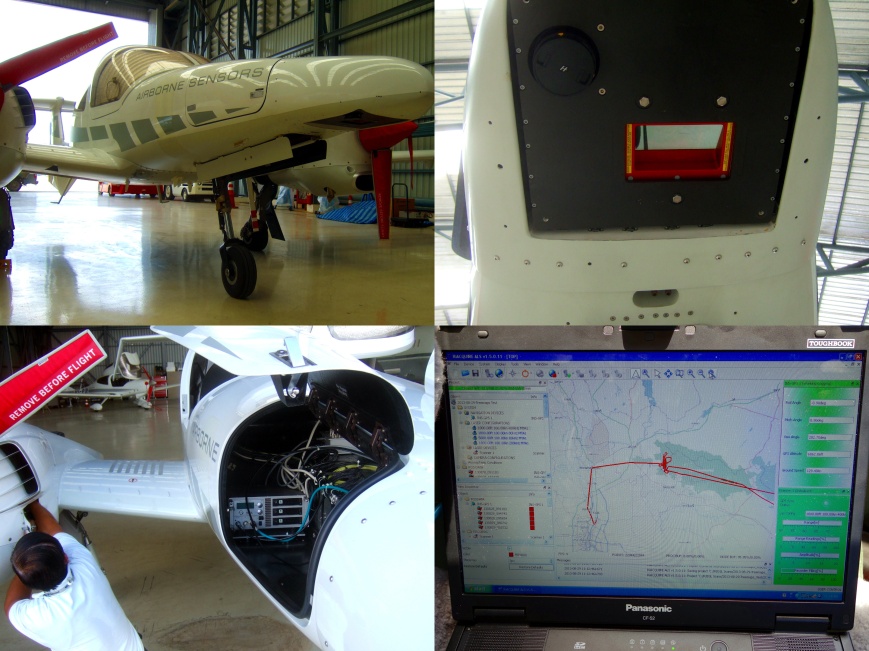 Asian Aerospace Services Ltd. and rapidlasso GmbH flew a RIEGL LMS Q680i LiDAR system out of a Diamond DA42 “Airborne Sensors” aircraft above dense tropical rainforest in Thailand. We did a short test flight to determine whether the LiDAR would be able to penetrate the canopy of Khao Yai National Forest. The original objective was to demonstrate that the scanner is able to “see through” the canopy in order to produce data for the TREEMAPS project of WWF Thailand funded with EUR 1,730,205 through the International Climate Initiative of the German government. Unfortunately Germany had to pull the funding for TREEMAPS after political tinkering started to interfere with technical objectives, and the LiDAR produced by our “pro-bono flight” has become the only tangible outcome produced by TREEMAPS. We are now making this data available under a Creative Commons Public Domain license (for download see below). 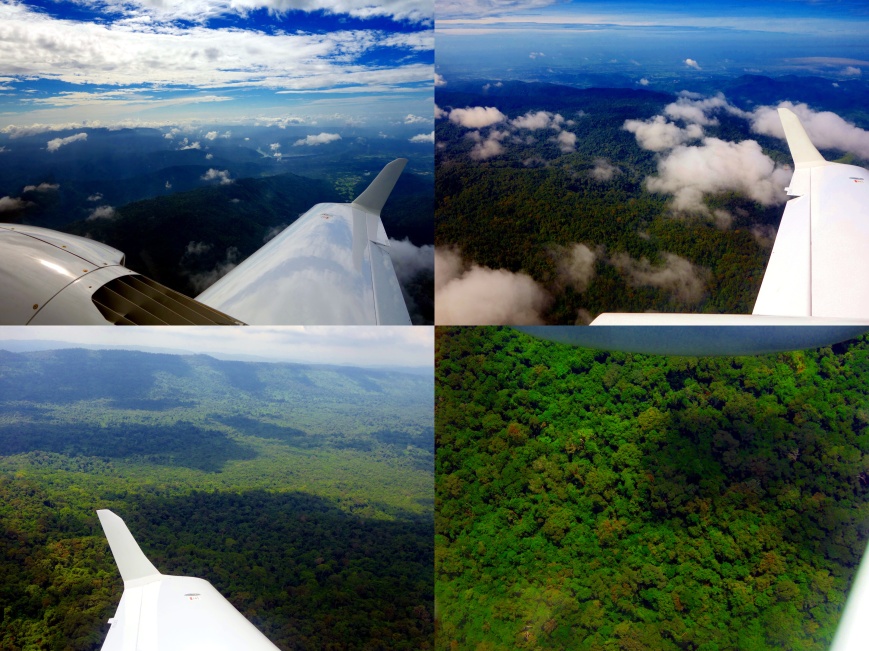 Above Khao Yao National Forest during a test scan to investigate the canopy penetration of the RIEGL Q680i LiDAR scanner.

Low clouds disrupted our original plans but we had one cloud-free stretch during a ferry flight between target locations. We were scanning for 90 seconds at 1200 meters above ground with a speed of 220 km/h. The Q680i was set to operate at a laser pulse rate of 80 kHz with the polygon mirror rotating 10 times per second. The effective scan rate was 240 / 360 * 80,000 = 53,333 shots per second, as each of the 4 mirror facets covers 60 degrees – summing up to 240 degrees – and there are no laser shots leaving the aircraft for the remaining 120 degrees of between facets.

For each shot the outgoing as well as the returning waveform are digitized and stored to RIEGL’s proprietary SDF format. We used RIEGL’s RiPROCESS software (version 1.5.8) to export the 4,770,152 shots as full waveform LiDAR to PulseWaves and to extract a total of 7,956,587 returns as LASzip-compressed discrete LiDAR to the LAZ format. 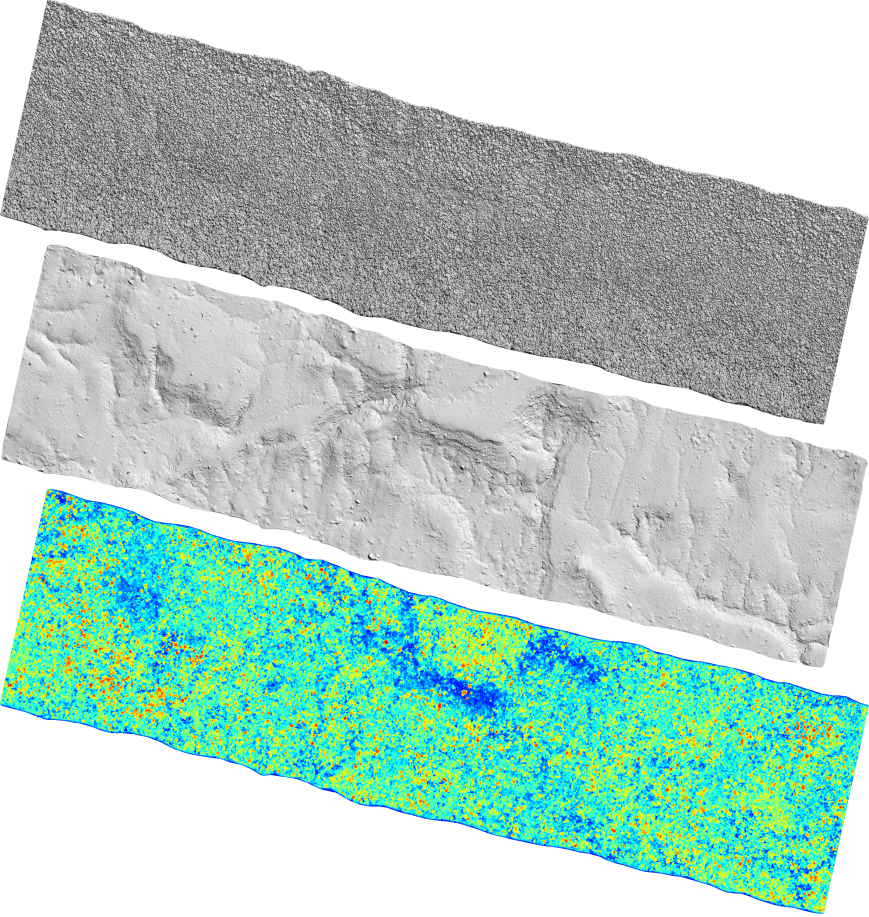 The DSM, DTM, and CHM of the 5.5 km long strip scanned above Khao Yai National Forest.

The Q680i produced sufficiently many ground returns to compute a “plausible” DTM (using lasground and las2dem of LAStools) despite the dense 45 meter tropical canopy during leaf-on season and high humidity. Typical terrain features such as streams and slopes are clearly visible in the hillshading. The corresponding Canopy Height Model (CHM) uses a false coloring that maps vegetation heights of 0 meters to blue and heights of 45 meters to red. There is less vegetation (darker blue) in areas that appear to be in the steeper parts of the DTM.

Only 5 % of pulses emitted produced a discrete return on the ground … this is rather low. It means that the generated DTM will be of much coarser resolution than the number of pulses shot per square meter would typically suggest. Of the 250,473 points classified as ground only 30,931 are single returns where the laser had an unobstructed view of the bare earth. More than half of the ground returns come from laser shots that had already produced two or more vegetation returns and 7,665 of them had their light energy weakened by grazing four or more layers before hitting the forest floor. Scrutinizing the full waveform LiDAR might lead to more ground information to improve the accuracy of the DTM.

We are happy to provide both – the discrete return as well as the full-waveform LiDAR – under a Creative Commons Public Domain license to researchers world-wide. You can download the data here:

Just in time for ELMF 2014 in Amsterdam, rapidlasso GmbH and Carbomap Ltd. have teamed up to further the development of tools that better exploit full-waveform LiDAR for the forestry and carbon market. This partnership brings together many years of expertise in processing discrete and full-waveform LiDAR with a wealth of experience in applying this technology within forestry and biomass applications.

The full-waveform tools are built around the PulseWaves format, an open LiDAR format that is the full-waveform sibling of the venerable LAS format, reaffirming a joint committment to support the use of open data formats within the LiDAR industry. Software will be developed both as stand-alone tools as well as for use within the IDL framework.

The use of LiDAR in the forest and carbon industries is expanding rapidly. The new partnership between rapidlasso and Carbomap targets the development of solutions for this growing market. Together the two companies can offer a wider range of tools for vegetation analysis that better exploit the additional information captured by a modern full-waveform scanner, including the newest multispectral instruments. 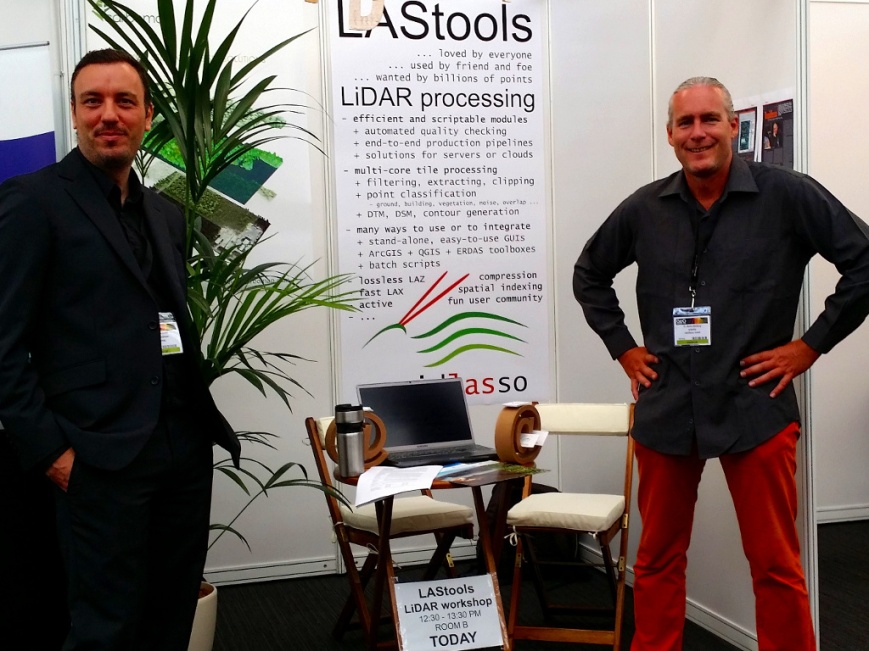 About Carbomap Ltd:
Carbomap is an environmental survey company spun out of the University of Edinburgh. The company takes forward over five years of world-class research in the development of a Multispectral Canopy LiDAR, a revolutionary, patent-pending laser scanning instrument designed to fill a gap in airborne forest survey requirements. The founders are international renown for remote sensing methodologies, satellite radar mapping, forest structure mapping, carbon sequestration and airborne survey. Carbomap is currently the only company with tools for analysing multispectral LiDAR for forest applications. Visit http://carbomap.com for more information.

Eric van Rees, the editor of the Geoinformatics magazine, met with rapidlasso GmbH at INTERGEO 2013 in Essen to have a quick chat about LAStools, LASzip, and PulseWaves as well as our LiDAR processing toolboxes for ArcGIS and QGIS. In the three-page article we talk about the beginnings of rapidlasso’s software, about when and how the company got started, about our various open and closed source products, and about current projects. The interview was published in the most recent October/November edition of the Geoinformatics magazine that was distributed in print at the SPARELMF 2013 conference in Amsterdam this week. If you did not get a copy you can read the online version of the magazine here.

This week rapidlasso GmbH is exhibiting its LAStools LiDAR processing software in tropical Cairns (Australia) at the LiDAR Technologies 2013 conference that is emerging as the premier LiDAR event in Australia. This marks the first time that rapidlasso is acting as a sponsor with its own exhibition booth on the showfloor. During the technical program rapidlasso is providing an update on the recently released PulseWaves open data exchange format for storing full waveform LiDAR data. The PulseWaves DLL is now fully integrated into the RASP software of Airborne Research Australia (ARA) at Flinders University in Adelaide and full waveform data is showcased that was recently acquired by ARA as part of a TERN AUScover campaign. 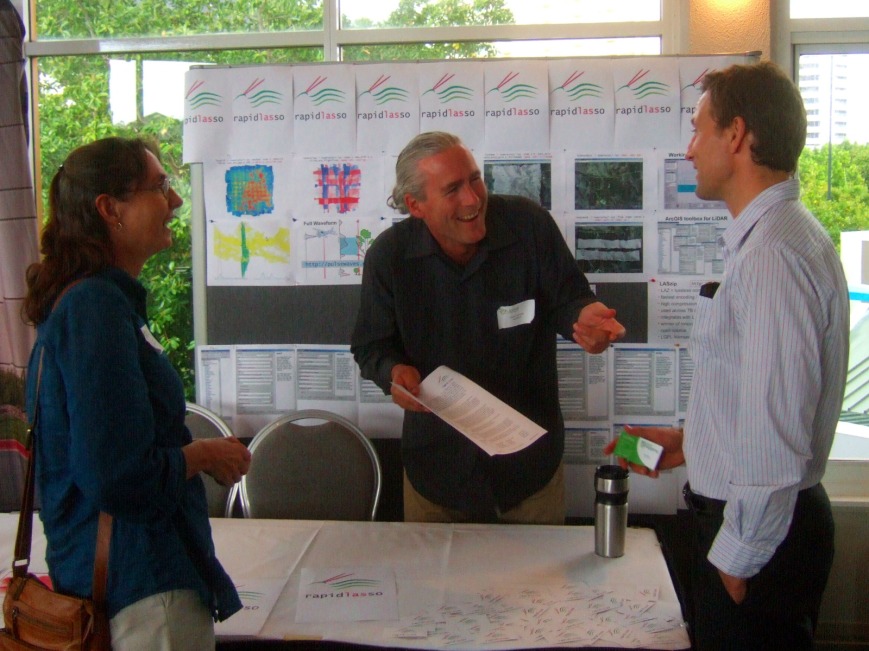 Just in time for the RIEGL LiDAR 2013 user conference, technology start-up rapidlasso GmbH has released an open data exchange format called “PulseWaves” for storing full waveform LiDAR data. The new format has been in development since December 2011 through transparent discussions at http://pulsewaves.org that involved many stake holders. The result is a specification simple to implement, yet versatile enough to store many different waveform flavors. PulseWaves standardizes storage and delivery for applications that benefit from information about the waveform such as forest management, biomass estimation, and LiDAR bathymetry. It complements the ASPRS LAS format for discrete returns and radically simplifies the exchange of full outgoing and returning waveforms.

The initial PulseWaves release comes with an open source reference implementation (LGPL) and a set of basic processing tools to display and convert the data. A compressed version of the PulseWaves format based on LASzip technology is in progress. With their latest release of their RiPROCESS software, RIEGL GmbH has become the first hardware vendor to allow exporting full waveform LiDAR data to the PulseWaves format. The development effort was in parts supported by RIEGL GmbH and by Airborne Research Australia (ARA) at Flinders University in Adelaide. 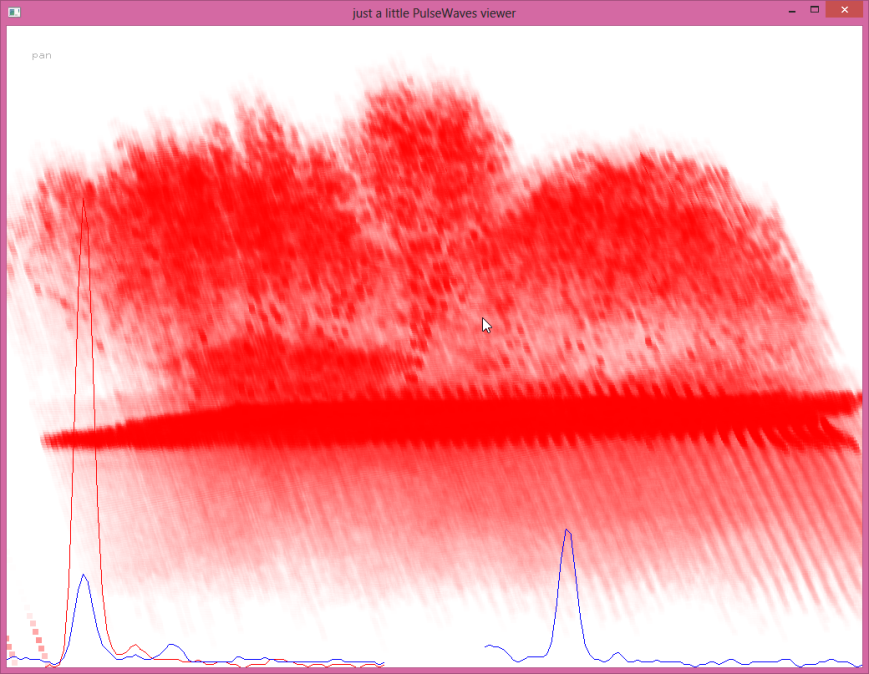 An illustrative visualization of full waveform data as rendered by the latest version of pulseview.exe. 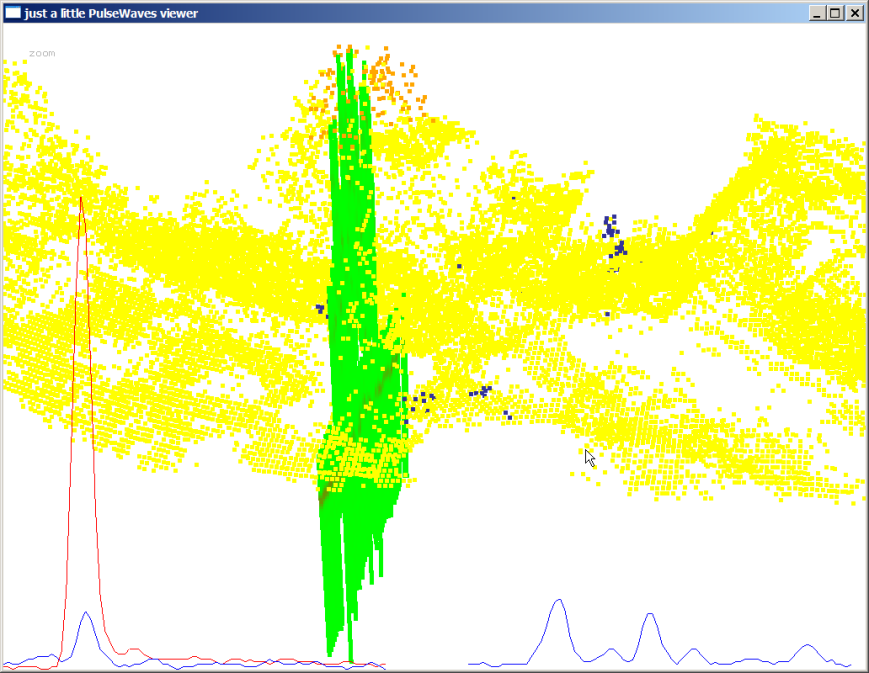 The 3D points (here mostly yellow apart from a few orange and blue ones) correspond to the first recorded waveform sample of each pulse. Through them a particular pulse (or a set of pulses) can be picked by pressing the ‘i’ hot key in the interactive 3D viewer – pulseview.exe – when hovering over a point. The color coding of these points indicates that different pulse descriptors are used for describing the waveforms of the corresponding pulse. For more details go to the discussion forum at http://pulsewaves.org/ where you find links to the specification, the tools, and some sample data.